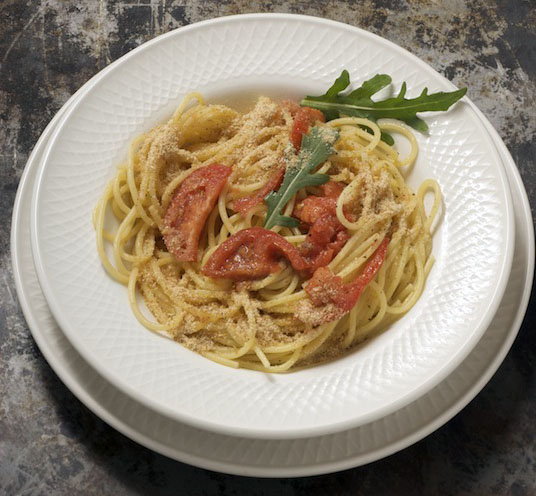 Poor Cuisine: a style of cooking best represented, in the past, by the lower class of a given society. Peasant cooking aims to utilize whatever is found in the kitchen, household, farm, etc. to prepare meals. The concept of cucina povera (literally meaning poor kitchen) can be found in every society and is really about making great food with simple, yet high quality, and available ingredients (including every part of the animal such as cow intestine, pig ears, goat head, etc.).
That is to say, utilizing both what is contained in the kitchen or pantry and what isn’t too costly at the market in order to prepare meals. In Italy, the kitchen of the poor came out of post War conditions and the generally depressed state of southern Italian life where food choices were limited (regardless of War).
The Salento peninsula, the heel of the boot, is not only a wonderful land of enchanting scenery, clear water and a treasure trove of artistic and architectural treasures, but it is also the cradle of a delicious gastronomy.
Know a people through history, art, culture, traditions, but also to understand his identity by means of flavors and colors offered by good cuisine tasting products from perfumes of the past and that still remain intact.

The cuisine of Salento is humble and poor and is based mainly on vegetables, grains, and beans, all rich in nutrients. It is also a cuisine very genuine because we use only the freshest seasonal produce. All the traditions of cucina povera have been handed down over the centuries and are influenced by the various rulers/ruling nations we have had. The cuisine was extremely poor but also extremely rich in imagination and amazing flavors.
The main ingredient in any kitchen in Salento and Puglia is the love with which our grandmothers and our mothers taught us to cook. Every dish is like a child and is cherished and loved from the time it is conceived until the moment of tasting.
Although we do use many cultivated vegetables, it is still very common to see wild variations of vegetables in our dishes, like le paparine, gli zanguni (wild chicory), and also wild asparagus. People will forage for these wild vegetables that grow free in the countryside and make the best side dishes with them.
This is the Salento cuisine, a poor and simple cuisine using seasonal ingredients, grown by farmers, healthy and nutritious, rich in strong flavors, genuine and authentic; It is the result of a balance between rural and seafaring traditions, dishes with delicate flavors, but sometimes very strong.
It ‘a cuisine whose origins lie in the past, to the time of Ancient Greece and the Roman Empire, but that has been enriched over the centuries even applying the gastronomic traditions of the many peoples that have ruled the territory: Byzantines, Arabs, Norman, Angevin and Aragonese.

Then we begin a journey through the Salento gastronomy starting right from the bread, the staple food of each meal. In this regard we must mention, la Frisa, not a street food, but a typical dish of la cucina povera that is substituted for a meal. It is a round hard bread that is dipped in water and dressed most commonly with only fresh tomatoes. Sometimes it can be topped roasted vegetables, tuna, capers and mozzarella.

We still make homemade pasta at home: orecchiette, sagne ‘ncannulate, maritati (a pasta combination of orecchiette and handmade maccheroni). Bread and pasta in Salento are made with unrefined wheat flour which has a characteristic dark colour due to the presence of bran. People who were too poor to buy wheat flour are said to have foraged the just burnt wheat fields or baking ovens for the the burnt grain (grano arso) that remained. They took it and made flour and then pasta with it. Today it is very required and appreciated.

Wild herbs also are often at the base of the dishes of Salento, the dandelion is great rehearsed in a pan with garlic, oil and hot pepper and the same goes for the chicory and then there are the lampascioni, wild onions from the typical bitter taste, which are fried for provide excellent side dishes.

Meat was not very common, and for the most part still isn’t a big part of our cuisine, as it was too expensive, most people in Salento traditionally ate legumes instead of meat except on Sundays, when a tiny amount was bulked out with a lot of bread to make meatballs. Meat was cooked just a few times a year to celebrate the most important holidays such as Christmas, Easter and the patron saint. For example at Easter time, in which it is traditional to eat lamb, he prepared every part and also cooked and especially the offal. These were used in the preparation of dishes that today have become highly sought for their goodness and balance of the flavors. They prepare Turcineḍḍi, with a strong flavor, they are spiced with the wise use of herbs and cooked over coals.
To give flavor to our dishes we used, and still use today, the herbs that flourish along the Mediterranean coast (macchia mediterranea): sage, rosemary, thyme, mint, marjoram. Anyone can go to pick them along the coast.

The people instead of meat cooked what the land gave them. Another product of the earth are the snails, here called in dialect, “municeddhri” that the peasants ate together with pesce azzurro (the group of tiny fish known for being less expensive). “Puppidi” are the tiny fish that are eaten fried or preserved with bread crumbs, vinegar, saffron and extra virgin olive oil.
Fish occupies an important place in the hearts of Salentonians, especially near the coast. You can find octopus (cooked in a special pot named pignata or eaten with salad), anchovies, shellfish like mussels and clams (cooked with pasta or in a gratin), many varieties of shellfish and blue fish. A typical fish recipe is scapece, a preparation that allows the conservation of the fish for a long time (small fish fried and stored between layers of breadcrumbs, vinegar, saffron and extra virgin olive oil).

The fantasy in poor cuisine dominates especially in desserts that reflect the influence of the eastern world (Byzantine and Arabic). The presence of other ingredients such as almonds, honey and cinnamon is typical of many regions of the Near East and the Mediterranean coast. Also cooked with few ingredients and often fried in the excellent olive oil produced here. Enough flour, sugar, honey and spices, such as anise, to make the delicious purceddhruzzi and ‘ncarteddhrate. Among the many desserts Salento that can be realized during the courses distinct “Pasticciotto Leccese”, flaky pastry stuffed with soft custard or the famous “Tiramisu salentino” with coffee and almond milk.

We do not use lard or butter but instead the excellent olive oil produced from our land.
The Salento landscape is teeming with vineyards and olive trees, mostly devoted to red and white wine and extra virgin olive oil, which is famous all over the world. King and Queen of our millennial history, are essential to any recipe and good meal.

The exquisite food of Puglia’s Salento perfectly represents the essence of the Mediterranean – sun, sea, rich soil and multiple cultures blend the intense flavours and aromas of this region’s unique products. The food should be eaten slowly, sitting with family and friends, with plenty of local wine – something that’s just as dear to the locals’ hearts as their cuisine.